Legally speaking, the concept of Small Change (dt.: Kleine Münze) marks the smallest degree of invention or of alteration that has to be applied to an object or an existing artwork, determining it as an original. That is, the term designates the smallest denominator of what makes a work protectable under copyright.

In a similar vein to what has art historically been coined Appropriation Art as “processes of quotation, excerptation, framing, and staging (...) not in search of sources or origins, but structures of signification”, to critique the idea of the autonomous and self-referential work as well as the commercialization of art, Julian Billmair’s diploma exhibition occupies the terrain of individual authorship, originality and copy as well as transferrals of meaning and value. In Small Change, however, the undertaking of multiple re-appropriations is conducted through an explicitly personal lens and navigation through systems of value in contemporary conditions of art production by tracing different material realities of objects and ideas.

The works presented in Small Change arose out of the artist’s range of side jobs performed during his artistic education at the Academy of Fine Arts Munich – including art handling for galleries and institutions as well as commissioned productions for fellow artists – that are now reintroduced into and re-interpreted within the context of his own creative process. Untitled (Amalia), Untitled (Davide) and Untitled (Judith) are photo-realistic paintings of images taken on his private iPhone while hired as a gallery technician for the purpose of documentation, archiving, insurance or production. The images index the often invisible but vital labor for the production, presentation, and circulation of art works and as such the creation and preservation of their value within the economy of art and show works by artists Amalia Ulman, Davide Stucchi and Judith Hopf, wrapped and packaged, or, respectively, measured with a copy-machine for the manufacturing of pedestals. Albeit not taken with criteria of aesthetic judgment but of practicability, the decisions made regarding packaging and positioning constitute part of Billmair’s creative production in hindsight. Time and labor spent here are re-claimed as an artistic process, vaporizing the indistinct demarcations between artistic and non-artistic work. Such as the original photos stem from hired work conducted by the artist, he in turn commissioned someone else to execute the manual task of painting. Within the paintings thus exist intersecting, different economies of time and surplus value that are made productive by the artist. The subtext considering the legal existence of the works are nearly invisible but poetically present in corresponding text works. On framed documents, the chapters on the respective, decisive and similarly elusive factors “Persönliche Schöpfung” (engl.: “personal creation”), “Geistiger Gehalt” (engl.: “intellectual content”) and “Individualität” (“individuality”) are tinted white, while the footnotes of the vanished text indicate factual information about their material constitutions, their stories of origin as well as legal precedents that in the history of art law and theory circle around ever volatile definitions of the essence of ‘art’.

Untitled (Angharad) is a sculptural production commissioned by the artist Angharad Williams for a solo exhibition. The glass hammer seen here, however, is not the one chosen for the display and as part of her oeuvre but a by-product from the production process. The corresponding text work cites “Wahrnehmbare Formgestaltung” (engl.: perceptible shape design): the material manifestation of an idea as another criteria for the legal existence of a work of art, that has here experienced a transferral of authorship in regards to the question of the originator of its  intellectual creation.

Birthed out of a public-art production made for another fellow artist, that involved casting and substituting a pastoral shepherd’s stick from bronze, in Untitled (Angelika) the deconstruction of concepts of authorship and originality is humorously put in conversation with Dolly, the first mammal cloned (or: copied) from adult somatic cells. The found image, showing the sheep seemingly posing for and expressing her individuality to a group of press, is adorned with the lettering “SMALL CHANGE” with actual coins. A doubling that is more than a tautology, as it hints both at the minimal alterations to the photo imposed by the artist (according to the concept of “Small Change”) and the simultaneous questioning of the valuation thereof that is considered as dependent on performance of personality and social capital.

A large sculptural installation in the center of the space articulates the room’s function as professors’ studio chosen as the exhibition site. The work consists of interiors found in the space – design classics such as an Eiermann table and Danish midcentury furniture as well as a Mac computer screen – that were put on a floor pedestal and, to the artist, emanate notions of status and success. Attentive to structures in an outdated model of of singular professorship that is often hermetic, Billmair in the context of his diploma show is, however, specifically interested in art education’s emphasis on making art a professional career, the production of a marketable artist personality, the development of an academic rationale for art and with it the question of his own ‘succeeding’. 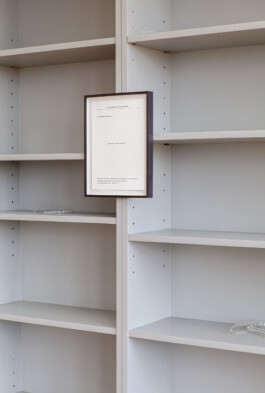 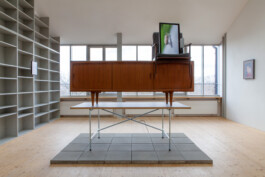 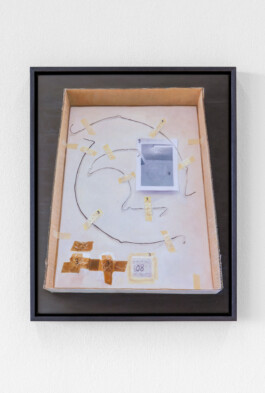 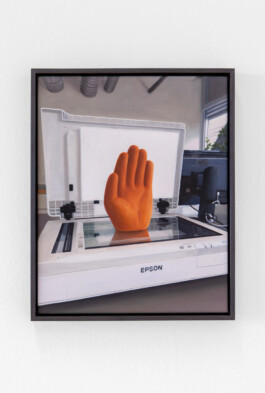 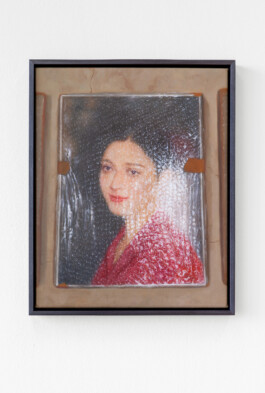 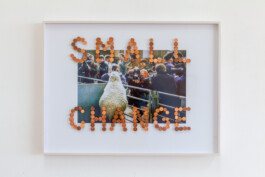 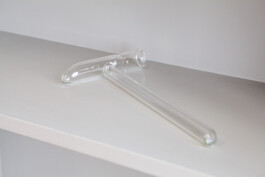 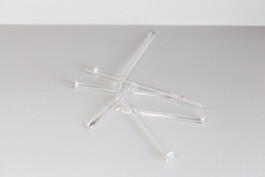 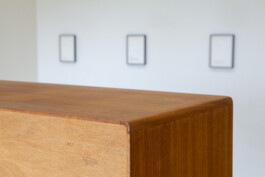 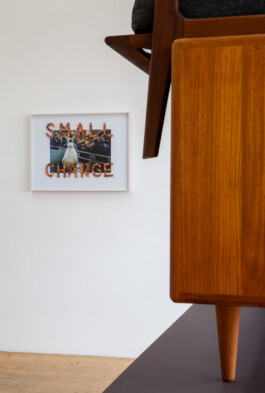 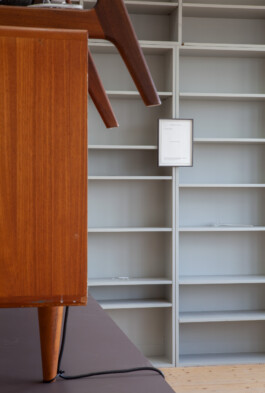 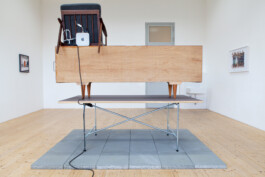 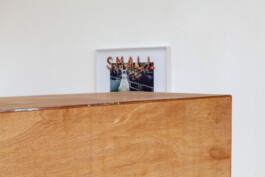 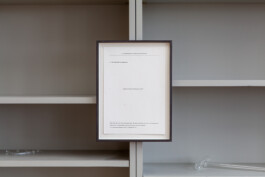 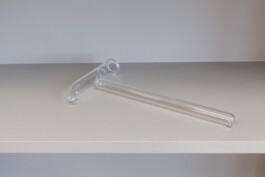 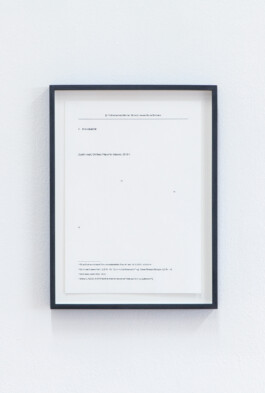 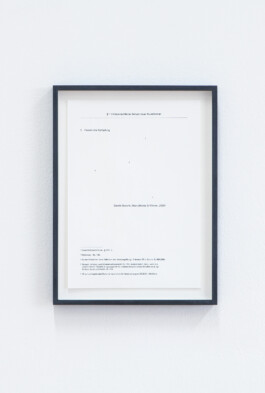 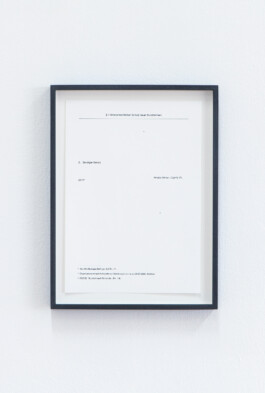 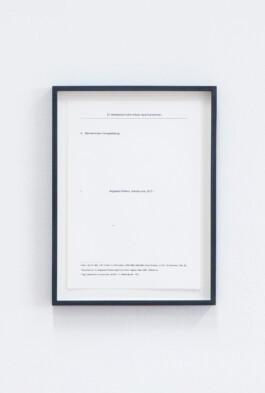 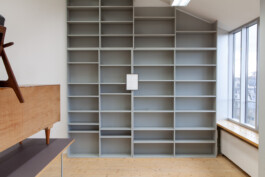 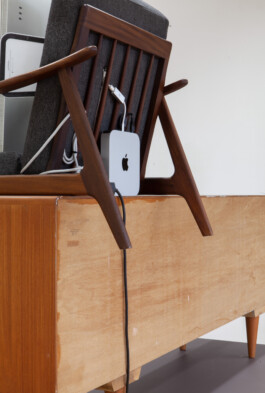 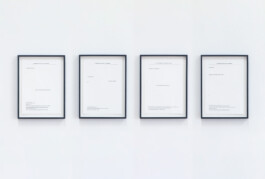 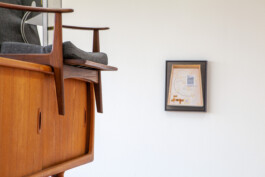